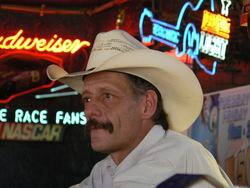 Swiss born, now - after 28 years in Texas - Sweden-based photographer/journalist, A. Michael Ulhmann started shooting profesionally as a freelancer for agencies and newspapers while he was still in high school. He specialized at an early age in concert photography. Other interests include aviation, nature, snapshots and Americana in its widest sense. In 1990 he moved to the States as a foreign stringer, mostly shooting at concerts, award shows or for interviews. His work got published all over Europe; in Buscadero (Italy), Country Circle (Austria), several music publications in Germany, Beat (Norway), but mostly in Switzerland, including but not limited in the Sonntagszeitung, Bieler Tagblatt, Berner Zeitung, Good News Magazine, Music Scene and Country Music. He now will be shooting with a European perspective for DPI.