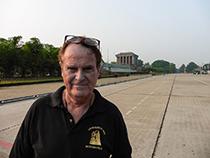 I am an American U. S. Navy veteran (1965 to 1967). During the war I was attached to VA-44, a Naval Air Force Squadron that trained American pilots to fly the A-4 SKYHAWK jet bomber.  Most of the pilots were later transferred to South East Asia, ending up on U. S. Navy aircraft carriers on "Yankee Station" in the Tonkin Gulf off the coast of Viet Nam.

At the time I didn't know much, if anything, about the Vietnamese or their culture. It wasn't until much later in 2005 while on a successful M.I.A. mission to Dak To in the Central Highlands of Viet Nam, near the border with Laos and Cambodia, that I began to realize the critical importance of understanding the history and culture of foreign countries. I spent nearly a month traveling around the country meeting and photographing people. I had an epiphany and realized that the Vietnamese are people like us, just trying to make it through life with their families.

In the interest of encouraging international understanding and peace throughout the world, I decided that I must do something to help these people before my flight home to New York. I visited the Director of Viet Duc University hospital in Hanoi, the largest trauma hospital in Viet Nam, and together we set up an on-going program to bring doctors and head nurses from the hospital to train and observe in American hospitals and medical facilities. The medical groups have had very successful visits and we have established a wonderful relationship between our two countries.