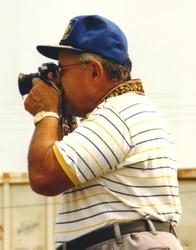 Dad Was a Railfan
By David T. Wiener
Summer 1995

Francis J. Wiener wasn\\\'t a public person and yet he was well known in the circles where he was known to frequent. You could go to almost any railroad yard office for at least three hundred-mile radius of North Fond du Lac, Wisconsin and you could find someone who knew him.  You could contact almost any railroading magazine in the country and his photographs would have been published there.  You could ask almost anyone stopped at the side of the road in Wisconsin taking pictures of trains and/or railroad structures and they would know who he was. You could ask railroad presidents who he was and many could tell you.

My dad worked for the Soo Line Railroad for most of his life. He started out as a brakeman, worked as number grabber, and, for most of his time on the railroad, as a crew caller. None of these jobs brought him any of the notoriety that I spoke of previously, and if anything the notoriety probably brought him grief from his fellow employees. Most did not understand his love of railroading. To them, railroading was a job that you did and then you went home. Even more could not understand why he would go out and take pictures of railroad engines, cars, buildings, trains, signals, and even track. What a waste of time and money is what most said.

What they didn\\\'t realize was how much my father loved railroads. To him the railroads were a part of history and a part of many people\\\'s lives, which few people today understand. He was out capturing this history and trying to save it to someday be passed on to the others that caught the railroading bug.

The Fox River Valley would never have developed into the paper center that it is today without the railroads and he could tell you the names of most of the now defunct railroads that once had track in Wisconsin, let alone in the Valley.

Something happened to my dad shortly after he retired from his career at the Soo Line Railroad. The Soo Line bought up the Milwaukee Road Railroad, sold all their track and holdings that they had and left the Fox River Valley forever. I wondered how this would affect my father, who had slides of every engine that the Soo Line had, since I introduced him to modern cameras in 1970. The railroad that he worked on, that his father and uncles had worked on and that his two youngest sons had worked on while finding themselves was now gone. What would he do?

I was shocked. Everyone that knew my father was shocked, including my mother. He surprised everyone by immediately adopting the Wisconsin Central as his railroad. He knew some of the employees that didn\\\'t move with the Soo Line and was on the job documenting that railroad\\\'s history even before it really began.

He shook hands, gave out his business cards, learned the names of all the officials, and gave them all 8x10 photographs for their office walls. He sold himself and railfans to that railroad to the point that they began calling him whenever anything of interest to a railfan would happen.

After a while the railroad wanted to promote itself and they called on my father to provide some slides. He said that they could have their choice of anything that he had that they might want. The railroad officials\\\' big mistake was asking when they could view some of his Wisconsin Central slides. They came to his house, he lowered his 8x10 foot screen, and he conquered them. Eight hours later they had chosen about a hundred slides for a brochure that required 5 or 6. They had not seen a quarter of his Wisconsin Central slides. They were impressed. They then asked him to choose the slides for them and he did. The president of the railroad was so impressed with what his executives did for a brochure that he wanted to pay my father for his work. My father refused payment, but he did say that he would like to meet the president of the company the next time he came to Fond du Lac. They did meet.

The President of the Wisconsin Central did pay and pay dearly for those slides. It wasn\\\'t money, for my father had a series of framed pictures that he gave to that man. My father wanted to talk to him, ask questions, express concerns and even give advice. I don\\\'t know what was said and I don\\\'t how it was said, but my father left that first meeting on a first name basis with the railroad\\\'s president. Often that man and a few other railroads\\\' executives would call my father for a wall to bounce ideas off of and to ask advice.

This led to the second and as far as I know only other request made by my father of the railroad\\\'s president. My father pointed out to the president that railfans help to make many railroads popular and also unpopular. Also, most railfans do know what they are doing around trains and that it might be a good policy to promote railfans rather than throw them off the property. The president by now knew my father, his history, and a number of other railfans and knew this was true. He apologized to my father for the treatment that he had received and, as my father later learned, the president sent a memo to be posted at all Wisconsin Central offices that railfans were not to be bothered unless they were endangering themselves or doing damage to property.

There was one other bonus to this problem. To insure that it would never happen again to my father or mother, since she was almost always with my dad, the president issued a lifetime pass to my mother and my father that allowed them on any and all Wisconsin Central Railroad property at any time of the day or night. This pass included that they could ride any train that operated on the Wisconsin Central. My mother had her letter framed, but my father all but wore his out showing it to everyone that might have an interest.

Yes, my dad did go back to Minneapolis and did crawl on the engines enough so that employee did get to read the letter. Best of all, the employee didn\\\'t believe the letter and called the president for confirmation and was almost fired for not reading memos.

My father also went to the North Fond du Lac railroad yards everyday that he was home, at least once a day. He got to know the employees, their families, and their interests and handed out samples of his work to anyone who would appreciate it.

This sincere kindness was paid back a hundred fold. Employees kept him appraised of what was going on with that railroad at all times. Many times he would know things about the railroad long before the executives would and would share his concerns about things before the officials were given the word. They always wondered how he knew so much.

Employees and foremen would call him when new cars, engines, or when special machines were coming out of construction. He always had several telephone calls every time a special train was coming. He liked almost everyone and almost everyone liked him.

My father died unexpectedly in his sleep the night after a physical that said he was healthy. I\\\'m sure that was how he would have preferred to die. But this is not the end to this one story of my dad, but rather a strange beginning.

The funeral was large in nature, but not design. We called family, friends, and acquaintances like every other family does. We expected quite a few people, but the turnout was almost too large. The funeral director asked my mother after the first night if she would like another night for viewing and postpone the funeral, for we found out that people were still standing in line outside at nine o\\\'clock waiting to get into the funeral home even though viewing was from 4 to 8 PM. There were flowers from the presidents of three railroads, two railroad employee unions, that my father did not belong to, and too many individuals to mention.

My mother had over a hundred request from men to be pallbearers and she honored them all after she found out that many would lose a day\\\'s pay for being there if they were not a pallbearer. There were six that carried the casket and it ended up being over a hundred who lined the church and the walk to the grave that were also called pallbearers. There were people, which we know of, from fourteen states and four countries. There were cards, telegrams, and flowers from people all over the world with whom he traded railroad slides.

This is not the end to this story either. The ending truly came on a cold rainy October day half a year later. It started at the funeral as an idea. Some of the Wisconsin Central employees are given credit with having the idea, and, indeed, did suggest the final selection of the idea. The idea was some kind of tribute to my father as a friend and promoter of railfanning and especially with the Wisconsin Central. At the funeral the pallbearers included the presidents of two railroads and yes, one was the Wisconsin Central. The idea grew into a rumor and then became reality. The Wisconsin Central President thought the idea was good, but didn\\\'t want to start something that might not be popular with the employees. So, sometime in the weeks after the funeral, there was a questionnaire sent out to the employees at North Fond du Lac and the response was predictable. They did want to do the tribute, but they did want to modify it somewhat. My mother was thrilled by the idea and said yes, the employees were right to modify the original idea.

The President of the Wisconsin Central, that Saturday in October shut down the entire shop operations so employees who wanted to attend could. All the buildings were open to the hundreds of railfans that showed for that dedication day. The president of the railroad wanted to name the next new locomotive for my father. The employees said no. They wanted to name the oldest, smallest locomotive that the railroad owned, for my father, because it was purchased just to move things around the shops area and never left North Fond du Lac. The employees thought that they best knew my father and thought he should stay close to home and friends.

So if you get to North Fond du Lac, Wisconsin go to the Wisconsin Central yards and ask to see engine #1, the Francis J. Wiener. Tell them you are a railfan and the employees will usually take it out into the sun for you to get a picture. You see it is the only known locomotive in the world named for a railfan.

When I get really lonely I go sit in the cab with my dad. He is always there. I\\\'m sure he would like you to visit too.

So, now, if you want to see the WC #1, you must go to Laona. The owners assured my family that the “Francis J. Wiener” would be restored to operating condition, but it might take a year or so to do it. Operating or not, I plan on going for a motorcycle ride this summer and visit the cab of the engine and talk to my dad some more. I know he will be there …