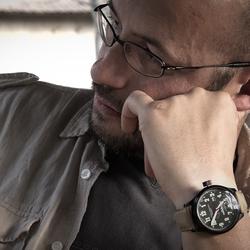 Italian photographer Gabriele Orlini is enamored with visual storytelling from a humanistic perspective, including depicting its contradictions and "struggles of love with the world".

Gabriele's work in Cameroon, Democratic Republic of Congo,Tanzania, Mozambique, Angola, India, Argentina, Venezuela and the Occupied Palestinian Territories has been recognized, published and exhibited both nationally and internationally.

In 2011, he received the prestigious Author of the Year FVG - FIAF award in Italy.

After traveling worldwide, Gabriele began a personal project inspired by argentinian author Jorge Luis Borges' poems in the Recoleta Cemetery in Buenos Aires, Argentina. Since, he has been documenting monumental cemeteries around the world.

Gabriel currently lives between Argentina and Italy and  is available for commissions and assignments worldwide.